In summing it up, I guess I'll preface it by saying that this, more than any previous year, was one where the shared experience of being the connected human was a more closely bonded one than ever. The shared experience definitely had a timbre, a scent, a feeling to it, and in most individual examples it was pretty below average. It's rare to talk to someone who said they've had an amazing year and meant it.

It can almost feel like saying that things happened and that they might been pretty good is a source of guilt; as a catholic-raised Irish person, I can tell you a thing or two about that. So, with that in mind, here's how things went, and a few aspirations, thoughts (definitely not resolutions) for 2022.

One thing I should mention, since it kind of encompasses all of this -- I've been seeing a psychotherapist and been back on SSRIs since late 2020. It's not a big thing, it's helped a lot, and I think it's important to mention. It's not a sign of weakness to look after mental health, and to be seen to do so, even if you're meant to be an omnipotent entity (and yes, even if that requirement exists only in your own head).

Probably warrants its own entry? Or a few entries. I changed jobs in June, from being at Google for almost 17 years, to a much smaller place that's in a very interesting growth phase. One of the interesting parts about this was that the new place is fully remote, in a way that doesn't disenfranchise remote workers (i.e. everyone is remote). This has been something I've wanted to do basically forever. It was pretty clear from what was happening at G that they were not taking remote work seriously, so that was one of the contributing factors. Coming into 2021, I didn't know what I wanted to do, but I knew offices as we know them are from the past. I was kinda done being '8 hours from the mothership', kinda done getting on a plane every 6 weeks ro so to remain relevant and defeat information compartmentalisation, and also kinda done with a lot of things that are inevitable when your employee count goes into 6 figures.

The new place has been great! Due to the remote work piece being built into how they do business, I feel a lot more connected, ironically. I've yet to meet any of my co-workers in person, although it's alleged this will happen in June 2022. Sounds about right :-)

As part of this, I've also been spending some time at a co-working space. I'd be lying if I said I don't miss the office ambience sometimes, so it's good to have the option. Home is still home. Speaking of which...

Home is still as it is. Keeping healthy and sane is a bit of an uphill struggle, as I suspect it is for many. We did manage to make it out when restrictions permitted (we even made it to Finland!). Overall, I'd call this ticking over. There's a degree of 'normalcy' that many people are waiting for the other foot to drop on that I suspect we'll just have to declare someday.

Sadly, the Small Cat left us at easter time, from lung cancer. She showed up at what at the time was my doorstep, 12 years ago, right as myself and J started seeing each other. She was my cat, but also our cat.

One of the things we said we'd do if we ever lost Small Cat (she....didn't like other cats, and barely tolerated our other one) was to start fostering kittens. So, we took in a few litters, and eventually as things go, we met Tortellini, our 'failed foster': 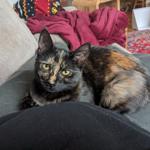 We weren't planning on another tortie, but they tend to find you.

I did manage to do a little bit of 'getting on my motorbike and going far away' this year - managed a trip to Scotland with some biker mates, and got just the right amount of rained on. 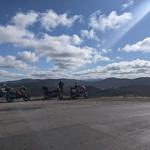 I've also been studying, practicing and getting ready for the RoSPA test, which is one of the tougher civilian motorbike certifications. I'm hoping to do some blood bike work in 2022, all going well (the test is a prerequisite). It's been a great way to keep up skills and progress.

I also started doing gigs again -- I kinda wound down the involvment with one group I played with, and started playing bass for a Ukelele band in Dublin. Gigs have been pretty quiet since things went south around december-time, but there should be a lot going on there in 2022 all going well.

I also did something I'd been meaning to do for a long while, and joined a shooting club. I've been meaning to break into it for a while now, and it's one of those "just bite the bullet" things (the upfront costs are singificant, and the licensing rules are weird). It's been gratifying to see actual improvement in my shooting over the last few months. Again, more to come on that.

All in all, given the circomstances, it's been a pretty good year. I've had to take calculated risks to do so, and I've most likely been very lucky not to get sick or to lose anyone close to me. It's part of a longer journey, and I'm happier with the amount of control I have over things (macropolicies keeping me at home notwithstanding).

I'd like to get a bit more relaxed about using the advantages of fully remote work -- I think it'd be a shame to have this kind of position and then work from my home office every single day. But, baby steps :-)

I mentioned it on my magical exploding twitter feed, but I feel like there's very much an onld-meaning meme going around that Everthing is Awful and we must not buck this narrative. On balance, things are pretty awful. But, I think we also have a responsibility to celebrate the okay things. The world is giving us pleny of excuses to be morose; let's not help it too much.

To 2022. Because it beats the alternatives!