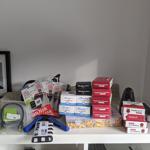 So I've set both a really good example (take your vacation!) and a really bad example (Don't leave it all til the last minute!) for work folks, and therefore today was my last day at work in 2020. It's been a year.

One of the things I'm especially looking forward to this time round is taking on projects and doing things in an active way -- a lot of the time, my primary complaint when I take some time off is that I get to the end and feel like I've wasted it. I often feel like I can't get things done because there's some crucial thing I need to box all my time off for. A few months back, someone casually remarked to me that that sounded like burnout. So, taking this time was one of the things I wanted to do.

The other was actually going and doing something about some of the ways my brain worked. That means drugs and therapy. I'd done some advocacy work (where I could) at work around mental health, and even while I was doing that, I kinda realised I felt a bit hypocritical, because I was basically untreated (aside from a few abortive attempts to go to a therapist that amounted to being handed a burned CD of whale noises and being told to google CBT).

So, long story short, I've been back on SSRIs (I was on them for a brief time about 10 years ago), and I'm seeing a much more engaged and useful therapy person. It's been pretty great, actually. I feel a lot more like myself again - like a version that isn't really struggling as much, without the mind racing constantly.

One of the side-effects of this, of course, is that I've started to write code and do some wee projects again. I hadn't felt up to this in a long time. Probably years. It's a good feeling. What's helping right now is Advent of Code, but I've also got a few things going at home. Hence the picture of the haul of RPi stuff -- which I do intend to write some more technical posts on, as I progress. A month off is long enough to form some good habits; maybe logging more stuff is one of them? No Promises :-)

I note at this point that I do tend to go big or go home on hobbyist stuff. A month is a long time, let's see where we get.

But first, some decompression. And to put up the tree.