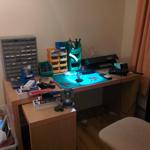 So, every October or so, I ask HR at work for a report of people on my team (I have somehow tricked The Company, or they have tricked me, into being responsible for about 40 people) who haven't taken enough vacation, since we can only carry over 5 days. Due to accounting messing about for my leave earlier this year, It turns out I had 17 days left, and could only carry over 5. "Whoops", I thought.

So, I took 3 weeks off. My leave in the summer was good, and overdue, but stressful and punctuated by having to call people, stand over people as they do jobs, worry about things going well (Ever had to hope a plumber has a steady hand drilling a hole in a 500 euro ceramic sink, as you race to a kitchen suppliers to get parts they forgot to send out and you needed today? That was a fun tuesday morning). A lot of it felt a lot more like work than I would have liked. So, this time round, I made a small list of "Things I will feel like a failure as a person for not getting done". I then promptly did about half of them, then declared "Fuck it, it's Christmas" and sat around enjoying the outcome of the previous time spent working. It has been glorious.

2014 has been one of the more eventful years in the last few. Of course, I moved house, for the first time in almost 10 years. The above picture is my workbench for doing electronics messing and airsoft, which only got unpacked and set up this week. This will give you an idea of my approach to moving. I still have a roomful of boxes.

I also did more of my "Doing things is better than not doing things" stuff. For me, as an on-again off-again GAD sufferer, this has brought about an amazing sense of well-being. The alternative to figuring out how to be alive like this is the slow death of coasting through life without ever challenging yourself. I'm doing it in small way. I'm not about to take up lion-taming, but I'm doing my bit. I did the mandatory training and started riding a motorcycle, which was a big unnecessary thing I thought would help, and it has. It's easy (and especially easy for me) to rationalise away any thoughts of doing things that aren't strictly necessary - it's a defence mechanism against failure. I'm trying my best to do things when my brain goes "Bleh". I'm also trying my best to fulfil a few of the "Wouldn't it be cool if..." ideas I often have and then squirrel away for 'later'. There's no later.

Hopes for 2015? I'm trying hard to have specific ones. It's not something I think about a lot, and the 'five year plans are for losers' attitude that got me through my 20s has worn thin a little bit. So, I'm still thinking about it. I hope I can do more stuff that I've only thought of doing but then threw away the idea before. I hope I can figure out a reproducible way of making myself happy. I hope I can be a better partner, a better manager, and a more open person without stressing myself out or being uncomfortable all the time.