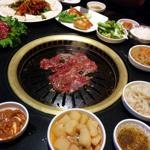 Excellent korean BBQ is a lot less cheaty than sausage and stodge.

As hoped, got a bunch of stuff done on the plane, and managed to not have an awful flight. I can tell my sinuses aren't going to like it later, but for the moment I can take solace in meat.

Mountain View is as it usually is, except it feels a lot more like it's reached its tipping point as far as straining the local infrastructure goes. People don't want to live near the office (because let's face it, Mountain View itself is a bit of a shithole), so they end up commuting >1h from San Francisco (which is also a shithole) every day. At some point, being in the centre of the universe gets outweighed by a declining quality of life. Hopefully something creative happens, since I don't think it's a problem unique to The Company.

One more day in the office, then hitting the red-eye to NYC tomorrow night. I expect that to be a less pleasant flight, but at least I'll then be in NYC.