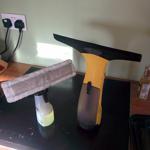 Domestic weekend! The first week back at work was one of those stealth first-weeks-back, where the first part is relief that nothing exploded in my 3 weeks away, and the rest was EVERYTHING HAPPENING. But it's the weekend now, and Amazon has a fancy Karcher window vacuum on sale. A window vacuum, if you don't mind. It actually worked, which restored my faith in branding (I wouldn't have bothered with one and would have declared them bullshit if Karcher hadn't been making one).

Somoene mentioned Medium to me last week, as a means to 'tweet a thing with more words than a tweet'. Over the years, I've used a bunch of things to keep an accessible log. I used to use LiveJournal until some russian mobsters bought it. I used to keep up with people on some NNTP groups, or via email. I don't really do email with people any more, which is a shame in a sort of compresed-time way. Remember when we used to write letters? I don't.

So, I'm pretty sure that some HTML files in a directory aren't going to get deprecated or fall out of favour any time soon. I can carry a means to reproduce them anywhere with me, I can rejigger them to some other format if the world moves on, I can use some other form of syndication, because I have the originals in markdown. You could argue that it won't fall out of favour because it isn't in favour, and you'd be right :-)

I sometimes think about how temporary a lot of social media is. People from the older school of personal journaling or websites came into it with an expectation that it'd be a record of their travels through life. It really hasn't become that, and I think that's fine - it is what it defines itself to be, which is a moving set of goalposts. Will Facebook be around in 40+ years, when I hope to be still here? I don't know, and neither do you. Will it offer a means to search for the times I talked about a particular thing at any point in the past? It doesn't even do that now!

And, just in the interests of fairness, neither do G+ or twitter in any meaninfgul way.

But, all this is a huge distraction from how I need to clean my kitchen.