Using GMail as a relay with Postfix

I fiddled a bit with this, so I thought I'd do a no-nonsense guide to doing this. There are other guides, but a lot of them are incomplete and will leave you with queueing issues or annoyances.

Then just generate the map file for the sasl_passwd file and reload. As root:

And you're done. Monitor your queue a few times over the first few days to make sure stupid stuff hasn't happened (the delay between mails might get tweaked), but in general this has worked for me.

I am alive. Apologies to folks who were following the electronics stuff -- the short version is that it worked, although I didn't get to use it 'in anger' as such. The other thing I learned is that when traveling through UK customs on the week of a royal wedding, having …

I've not had a lot of time to go at electronics in the past while (mainly a combination of work things and family things kicking my ass), but I got to some of it tonight -- The clever parts of the design and build are basically done, so what's left is … 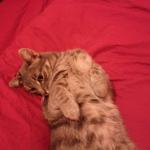 One year ago today, a very small ball of fur decided to mew outside our front door in particular. We let her in and looked after her for a bit, and eventually decided she could stay.

We're not sure exactly how old she is, we're guessing se was about 6-7 …

So, first steps. I picked up a few PIR Motion sensors. These are a specific kind, there are a few other kinds, but they should have datasheets. You might recognise the bulbous white shape of them from those motion-sensing light switches. They're about a fiver each and fun to play …